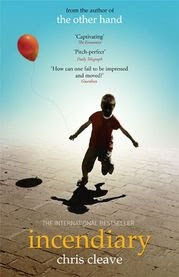 I don't know how to write this post as this book as left me somewhat puzzled. Did I love it, I don't know but am I glad I read it, well yes. A mother's letter to Osama Bin Laden it captured me at the beginning, lagged a bit in the middle and then caused me to sit upright at the end.

I felt that at first I was prepared for what I was going to read but once I started I kept looking for the safety net to keep me reading it. Saying that in the end I really could not put the book down and it was a swift two day read and finally it was all over. Having read 'The Other Hand' I was prepared for a bit of pessimism, negativity, or over realism, or whatever you want to call it, when Cleave sets the scene, I can only describe it as "no holds barred".

There is a way that Cleave presents his characters that I think you either love them or you hate them. It seems to be their normality that gets to people but which I really take to. There are always one or two statement his characters make in his book that I want to write down and never forget as they ring so true in the most beautiful prose. There are bits of the book that are sexually driven but rather than disgust they heighten the emotions in the book.

What I got was not so much a commentary on terrorism but on a woman dealing with these facts, images and most importantly the loss of her son. He follows her through the book in such a simple yet powerful and distrubing way, that in the end I understood her plea:


'Come to me and we will blow back the world together WITH INCREDIBLE NOISE AND FURY.'