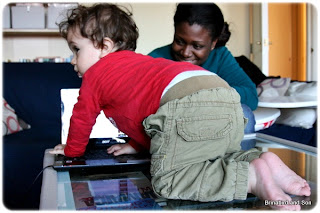 So I did some ironing today (very rare and could be a whole discussion in itself) and then it came to putting the iron away while it cooled down. With the wee man about it takes a bit of consideration. It's explained to you that you need to start house proofing from when the little ones start wondering about. It became apparent that we quickly had to buffer our living room table to prevent serious head injuries. Eventually he found his way into the kitchen and into the cupboards. There was only one cupboard of interest so it was easy to put lots of different plastic containers in there and that seemed to work to keep him entertained. Then he started climbing and we had to think about where we left things as suddenly everything seemed to be in reach. He was also fascinated with buttons and the washing machine became one of his new favourite toys. 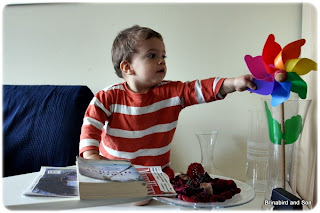 Now he is suddenly taller and even more ambitious to get things where it seems nothing is out of reach. He will climb onto the dining room chairs and onto the dining table if there is something of interest lying in the middle. All kitchen cupboards and draws are now fair game and his favourite sport is taking everything out and then placing them on the counter. He used to be allowed freely into the kitchen as he likes to play on the floor in there until he brought me back a potato peeler the other day. We have tried to teach him that certain things are definitely a "no" and he will say "aiee, aiee" and reach out and then quickly take his hand away if he sees us cooking or turning on the oven and even towards a cup of coffee. That did not prevent the spilt coffee the other day when he won the battle of being able to touch the cup. Everything is interesting and if it's really out of reach he says "up" and puts his hands in the air waiting. 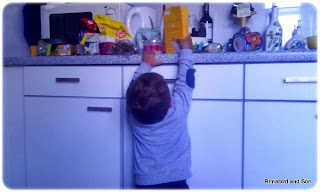 So that's me off to the store to buy some child resistant catches for the real "no" drawers in the kitchen.... until he figures them out!
Posted by Brinabird the wee man the Diva at 04:24