The birth of my baby boy

So I have finally have an excuse to once again tell my son's birth story thanks to the wonderful actually mummy.  Whether it's a worthy read or not I'm not really sure after reading some others but whichever way you look at it it was a special and well rather unexpected day for me.

Unexpected..... You see it was exactly two weeks before my due date when we thought we best go and collect the pram from the store. We had to rent a car to do that because we did not have one at the time. The plan I am now very surprised to say was to get a taxi to the hospital once I started having contractions. So on the morning of Saturday the 19th of February we headed out in the morning to collect the pram and then thought why not use this opportunity of having the car to head out and do some fun shopping for baby. After having a not so fabulous lunch out when I had funny feelings in my tummy I figured it was the food. The feeling wouldn't go away though all afternoon and felt like mild cramping. I shrugged the shoulders and said to hubby must be Braxton Hicks or something. My husband recollects me buying some book in ASDA and rocking from side to side while I was waiting to pay.

At home.......well things seemed to stop for a bit but really only for a bit. I was able to stand up and rock myself through the pain. I had a bath and took some paracetamol and tried to lie down. I was trying to be so nonchalant and even hubby was not overly concerned as he watched football and chatted to a friend. They were to go skiing the next day and he said to his friend that he would have to wait till the morning to confirm definitely as I was not "feeling well". We kept asking each other if we should phone the hospital but kept saying lets give it just one more hour. By that night I said maybe "something" was happening and we should time them...it was pretty regular only 2 minutes apart. At midnight we finally phoned. I explained that I thought "something" was happening and when I explained that "something" the midwife said it sounded like contractions but as I appeared to be managing at home to give it another hour. I had to admit that I thought it would be a lot more dramatic and a lot more painful. So much for knowing what a contraction feels like!

Half an hour later....my waters break. Now I finally understood the pain they talk about. Weren't we lucky to be able to jump in a car and head to the hospital. I was doubling over in the car begging hubby to drive faster. At the hospital I was 6cm dilated. The midwife commented that the contractions were obviously coming hard and fast. I could not stand, I could not sit, and I was oblivious to offers of gas and air.

Into the water........I sank happily finally being able to float and move about freely. It's funny it was only at arrival at the hospital that I finally decided to have a water birth and it was probably the best decision I ever made. I am sure on TV I have seen the midwife telling the mothers to push? So after a bit I finally admitted I felt like pushing and was surprised when she said just do what your body tells you. That is what I did for the next 2 hours. There was a lot of screaming and a lot of I can't do this. Hubby then whispered he could see the head. That was it really I was determined that this was my last push and my boy was coming out.

Hello Baby! I have to be honest my first thought was he looks just like his dad and I was so busy admiring him I had to be reminded to pick him up! Ooops. Now I can't let him go. 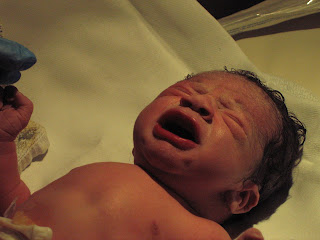 If you make it to the end of this one head on over to Actually Mummy for some other great reads.

Posted by Brinabird the wee man the Diva at 11:58