So what's in Croatia?? 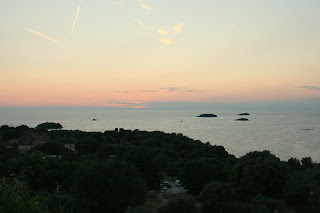 Actually that was the question my mother asked me recently when I told her we were going away there for a few days last week. It's not hard to think why she would ask such a questions, something which Europeans usually can take for granted. Being able to jump in a car and drive there was one of the first reasons to go to Croatia and of course the fact that it has a beautiful coastline with beautiful clear waters (though a tad bit cold). Being in Europe there is so much on your doorstep, places people would perhaps not consider when they have to travel farther afield. Actually when thinking about this post it was rather odd to read in Cosmo's August 2010 Uk Edition that Croatia, defined as super-stylish and super-chilled, is one of the 8 A-List holiday hang-outs, of which Beoynce and Jay-Z are big fans.
This was my third trip to Croatia and as yet it has failed to disappoint. So it does not have the white sandy beaches that you may come to think of when you think of the seaside but rather more pebbly beaches. Actually what you are more likely to find is the use of flattened 'rock formations' to relax on. Bringing a mat to put under your towel is good advice .

I can digress quite easily here on how well the Europeans seem to know how to 'do beach'. I mean some don't just have mats, they have thick padded mats or even better most just have their own deck chairs, sometimes pulling them along with their trolley's. You may notice as well that usually when they find a spot they like if possible to lay claim to it for the rest of the summer, and it's not just a case of waking  early , it's either one by never removing their belongings from that spot or two I have actually seen small hand written signs (so no sometimes you can't say 'I'm sorry but I don't see you name on it!'). If they are camping they bring their home with them it seems (and that includes satellite tv), so for those that think camping is about leaving certain luxuries behind can think again. Anyway I digress....
I'm  not sure what it's like if you are a vegetarian in Croatia but you certainly have no problems as a meat eater and grilled meat is usually top of the menu after the fresh fish that is, there are plenty little pigs roasting away on the spit in pretty much every restaurant you pass. I think I fell in love calamari on my second visit to Croatia and we possibly had it every single day. 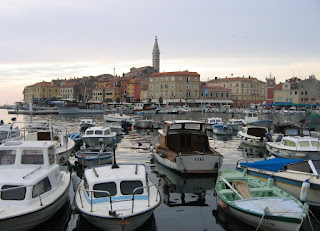 In the evenings it's usually nice to check out the local town with their small street alleyways, chruches, the town square and beautiful harbours. Above is when we went to visit Rovinj, and below is Vsar which is where we stayed on this last visit. 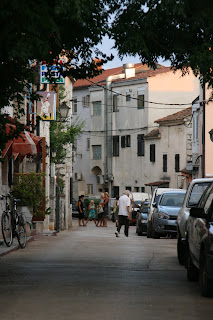 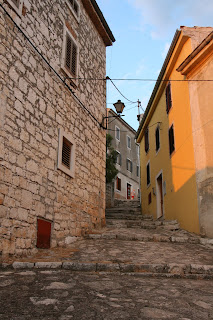 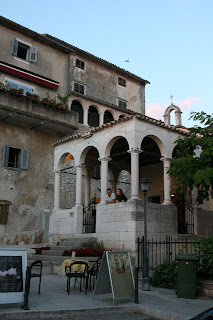 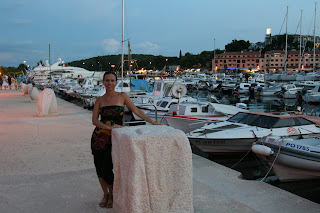 So what's in Croatia? Ultimate relaxation by the sea, with it's beautiful coastal towns and great restaurants with a fantastic sunset to round of a beautiful day! 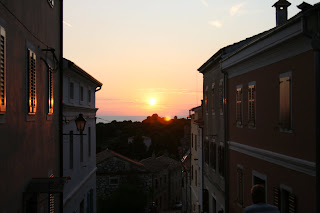 Posted by Brinabird the wee man the Diva at 03:33