So as this week is all about preparing for the big number one of my son...I bought the wrapping paper for his present today with an actual tear in my eye...I can't help but think of the little changes that have been happening with him.  All the big things make you feel so great but sometimes the little things are just as impressive. 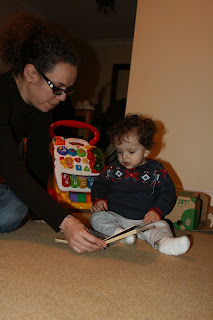 Wow that's a lot of little changes....
Posted by Brinabird the wee man the Diva at 07:40