The World according to Garp, John Irving

"This is the life and times of T. S. Garp, the bastard son of Jenny Fields - a feminist leader ahead of her times. It is also the life and death of a famous mother and her almost-famous son; theirs is a world of sexual extremes - even of sexual assassinations. It is a novel rich with ‘lunacy and sorrow’; yet the dark, violent events of the story do not undermine a comedy both ribald and robust. It provides almost cheerful, even hilarious evidence of its famous last line: "In the world according to Garp, we are all terminal cases." 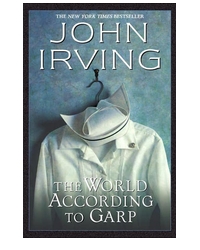 So my dad has read pretty much I believe all the books by John Irving. He raves about 'Cider House Rules' so that is definitely on the wish list but the one he give me to read as he finished reading it during his holidays visiting me is the one he struggled with, 'The World according to Garp'. He could only really read small chunks at a time but then had to put it down so it took him a lot longer to read than he would usually take. It was just kind of a strange novel. Not really raving reviews to convince me to read it but I never say no to a challenge when it comes to make my up my own mind about a book.
Well I would not say I exactly raced through the book either. It's not that it's boring or hard to read it just drained my senses. Let's just say that Garp's world maybe is not overly entertaining but rather sad and tragic events which pushes you to find out what is finally going to happen in the end. Garp as a writer has rather odd and interesting views of the world which thankfully sometimes adds humour to the novel.You also get to meet some really interesting characters throughout adding a bit of extra flavour to the novel.
I won't say I loved it but I will say it has left a lasting impression. I think as a contemporary american novel it is studied in schools I would be interested to be a part of that lesson.
Posted by Brinabird the wee man the Diva at 06:54

Email ThisBlogThis!Share to TwitterShare to FacebookShare to Pinterest
Labels: Books, John Irving, Reading, The World According to Garp