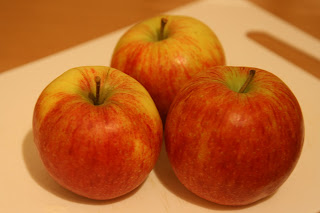 So here are the apples I got from the green grocer to bake hubby's favourite apple pie. I can never be bothered to mess about with the pastry so I always end up making a cake. I got the simple recipe from the silver spoon which as it has an absence of spices I assume rests on the tastiness of the apples. We like it spicy though so we added some.
Recipe
80g/3oz unsalted butter, softened
300g/11oz self-raising flour
3 eggs
150g/5oz caster sugar
3 apples, peeled, cored and chopped
whipped cream, to serve (optional)


Method
Preheat oven to 180C. Grease a cake tin or mould with butter and dust lightly with flour. Whist together the eggs and sugar until pale and fluffy, then beat in the butter until thoroughly combined. Sift in the flour mixture,  then add the apples and mix gently. Pour the mixture into the prepared tin or mould and bake for 30-40 minutes. Remove from the oven and leave to cool, then turn out, or serve immediately while hot. Served with whipped cream, if you like.
To my flour mixture I added a tsp of cinammon and some nutmeg. Once I added the flour to the mixture it became really thick and I thought how the hell am I going to get apples in here. As usual though I forge ahead and not just add apples but raisins as well! There was loads of mixture and it was interesting getting it all in the tin but...yep...I just forge ahead. I put a tray underneath the tin in the oven just in case there was spillage but surprisingly there was not. It turned out pretty good and tasted even better. 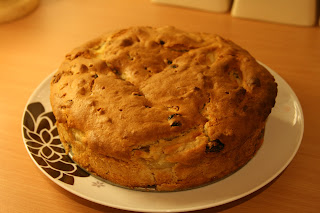 Whipped cream was not optional! 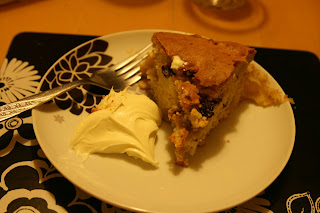 Posted by Brinabird the wee man the Diva at 06:36