As a mum I now put everything down to a stage. It's the best way to overcome any worries I may have and it gives me hope that things can change! I'm not too sure about this "stage" we are experiencing just now though but like with most things when it comes to my wee man I find the less I worry about it the better I manage it. Quite frankly I'm not even sure it's something to "worry" about, to manage or to just ignore and accept it. 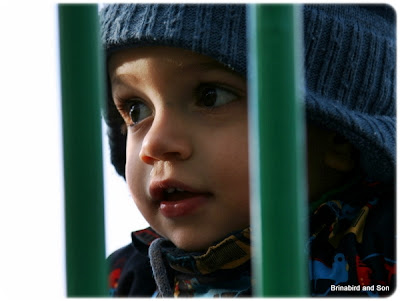 It started during our trip to Jamaica, a fear of the unknown, a nervousness around new people that just grew and grew. I guess it did not help that we kept saying that he never used to be like this, he's a bit shy. Then one day my wee man only went and used those very words to describe himself "I'm shy". It never overly bothered me until I noticed that while we were walking along or at the park if someone was walking past he would stop, close his eyes, the attention, even non attention was just too much. In certain situations he would cry if we had visitors, even friends he had played with quite happily times before. If the park was too busy he was not overly interested in playing until it quietened down a bit or would choose something else to do. Sometimes he would loudly shout "No!" if another child wanted to play a bit too close to him.

So dare I admit I actually ran to Google, the usual parenting forums to see what was out there about a "shy" toddler. Nothing has raised any alarm bells but one thing that made a lot of sense was stop using that darn word "shy". So my toddler takes time to settle in certain situations. I've taken to telling him he is fine and that mummy is here. Thankfully most of the times after a bit he does settle into a situation and happily gets involved. The crazy thing is that this contrasts to certain situations which he approaches with no fear. It's like it's not because he does not have confidence in himself it's just his personal preference. So this should be okay, not frustrating but admittedly sometimes it is a little bit frustrating. I think the tears are the hardest especially with friends he has met before and I'm there holding him. I'm telling myself to be patient and look at it from his perspective, he just needs time and space, and well that is not such a bad thing.

So do you have any experiences of your child being overly "shy" in certain situations? What's been your approach? Do I really need an approach?
Posted by Brinabird the wee man the Diva at 16:23

Email ThisBlogThis!Share to TwitterShare to FacebookShare to Pinterest
Labels: A toddler being shy, Self determination and confidence in a toddler