So for his first time hubby decided to go skiing in Scotland and considering I wasn't sure when I would be getting my next holiday I decided to tag along. don't worry I took my pregnancy notes just in case...I was only 35 weeks anyway... a whole four more weeks to go after the weekend! The plan was to read my book and drink lots of cups of tea and be treated to dinner in the evening. It was great to get out of Glasgow and breathe in some fresh air!
So on Friday we set out early and picked up a friend in Stirling before slowly making our way there. We stopped for lunch at one of our favourite places in Scotland...the Moulin Inn in Pitlochry. 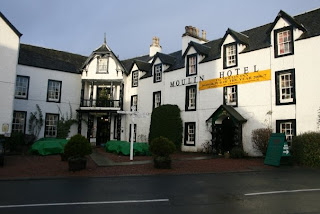 If you get the chance trust me you are not to be disappointed. The food is always great and they brew their own beer...though I had to give that part a miss this time. Then it was another stop in Aviemore for a coffee before arriving at our final destination...TOMINTOUL.... 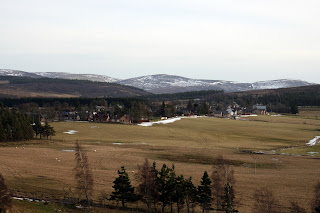 I have to be honest and say that there is not much to say about Tomintoul. You feel like you are in the middle of nowhere and I guess technically you are! There's a pub, a hotel and a B&B, no bank, no gas station but they have got a well known whisky shop...what more do you need! It is a gateway to walking in the Cairngnorms and well the closest town to the chosen skiing area of Lecht. We quickly discovered that Friday night that the pub was THE only place to eat in the evening so thank goodness the food tasted pretty good! I will not dedicate too much time to hubby's skiing experience as there was not much snow and mostly ice and a few bruises to show for it.
I noticed two cafes straight away so I was happy anyway. Strangely enough I have arrived home having hardly touched my book and with only one cup of tea under my belt. The sun came out on Saturday eventually and I decided to head out for a walk. My first walk was the Tomintoul country walk which looked like it went on for miles following a country road....so I am afraid I did not do all of it. I successfully made it to the Queens view taking me slightly over an hour there and back...and I stopped to take pictures. 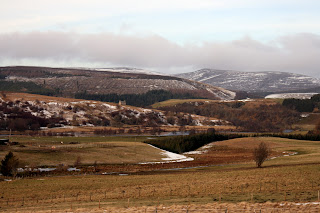 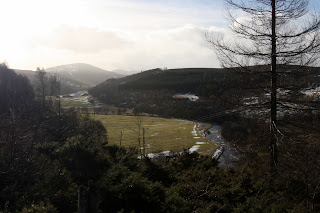 Well after such a successful morning I felt I fully deserved a nice lunch! Having decided though that I could not go the pub always to eat that did not leave me much choice. I went to a small cafe and had a cheese roll, and then made up for it buy having a cup of tea and a slice of carrot cake!
I was surprised at how restless my feet were so decided on heading out again for another walk...the Tomintoul circular path...sounded easy enough. It is mostly flat and is exactly what it says on the tin...a circular route around Tomintoul. It offered some wonderful views though but my camera seemed to be failing me. It was lovely looking to the river Avon and the snow capped Cairngorms. It took me about an hour and a half and I headed straight back to our B&B for a well deserved hot shower after. 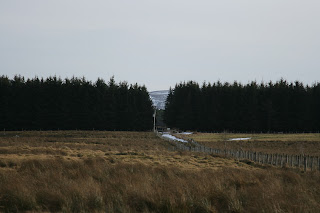 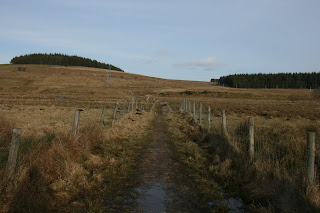 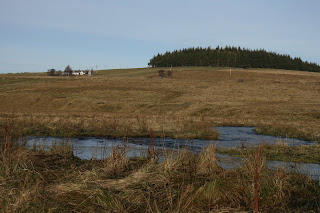 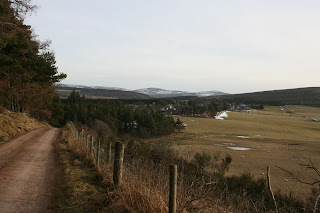 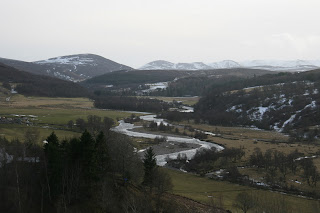 The boys decided that they had already had enough of skiing after only one day so on Sunday we headed to Aviemore where we did a 3 HOUR WALK from Glenmore Lodge (as you can tell I am pretty impressed with myself for having survived it...trust me I was a bit tired at the end!). We were originally heading to a bothy after a short forest walk but it only took us about 40 minutes to get there. 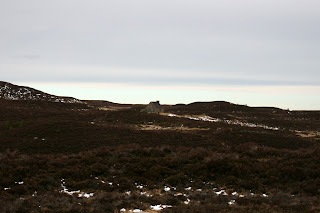 So instead of heading to the bothy we turned right and headed toward according to our map a barn ruin by a river. The path was a bit icy at times but pretty manageable and it offered great views of the snowy landscape. I nearly was about to give up as it never seemed like we were going to reach but thankfully after a few looks at the map and a few reassurances that it was just around the corner we made it! Getting there actually was not the tough part it was the walking back! The scenery and fresh air though made up for it all. 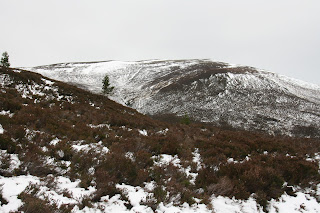 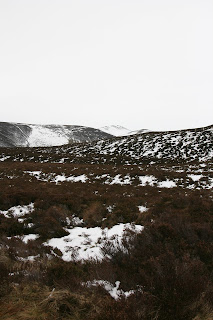 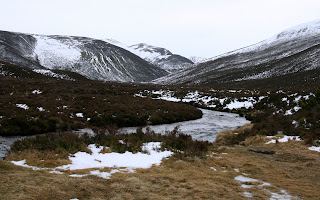 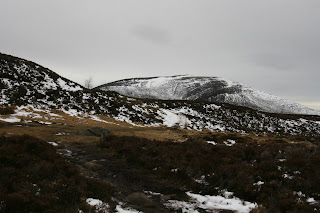 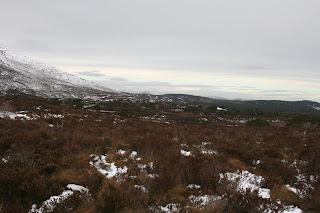 A quick but worthwhile escape to the Cairngorms! Only 4 weeks left till the beans b-day so who knows when the next escape will be...........

Posted by Brinabird the wee man the Diva at 12:18