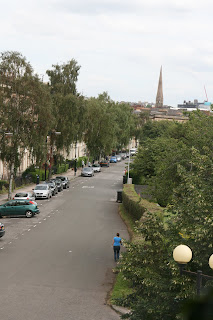 So here we are in the West End of Glasgow. A move we never thought we would make as we have always been city folk and only ever really looked to the West End with an intention to buy. We actually looked at flats to buy on the street we are now living on as it is rather beautiful, lined with trees and potted flowers hanging from street lamps. They come out in the mornings and evenings tending lovingly to their plants. 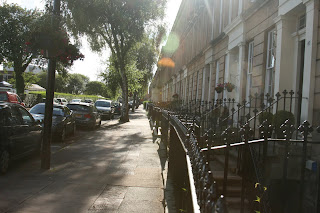 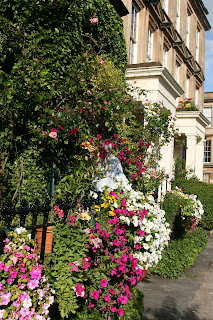 So even though we are living in the ugly building at the end technically we are closer to that dream. I guess most would argue a move to the West End is a natural move when you start a family as it is a more genteel area of Glasgow. It is definitely quieter and safer...our car insurance company affirms that by giving us back a significant amount of money for changing post codes! I have to be honest when I say that I definitely do see a different 'type' of person on the West end streets. We arrived in the West End with summer and the sunshine. We were able to observe a rather interesting phenomenon of neighbours sitting on their front "porch" (ok steps, ok sometimes on the sidewalk, ok sometimes even on the road) having a chat enjoying the sun. It's a rather strange array of students, young couples, young families, children with grandma, older people. I was told by a friend that it's a "West end thing". 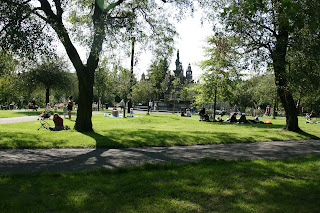 Not that it is idyllic as we still live in Glasgow which is always 'a little rough around edges' wherever you go. We are still close to a beautiful park but a bit of a distance from the shops...better for our pockets I guess. There are lots of great restaurants and bars but I can't tell you about those just yet as we are yet to sample them due to our lack of babysitting services (we impatiently await the next grandparents visit). We are enjoying it so far and I at least am actually savouring the change...whenever we get into the city centre though hubby is like 'don't you miss it?'...well maybe a little.
Posted by Brinabird the wee man the Diva at 00:31