So did I really see Africa? 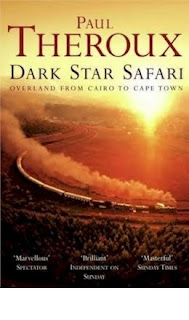 I have been to Africa twice now and loved visiting a bold, big and beautiful country. The landscape constantly changes and it always draws you in to experience what can seem as something mysterious and wonderful. Having just read Paul Theroux's Dark Star Safari though I am now beginning to wonder: "Did I did see Africa?"

When I started reading the book I thought of the time when I went to Cape Town I organised to visit one of the townships and my mother asked me why I would want to do that...I just needed to stay home for that (that would be Jamaica where poverty is in some ways comparable). In the end I am not sure what I really did get out of visiting the township. In the end the tour for me was not about experiencing a different culture or getting to know the 'real' Africa. I was instead put in a position to purposefully feel sorry for and guiltily pushed into helping. The only feeling I had when we went inside one of the families houses was uncomfortable. There was a point where I refused to meet the witch doctor! There was some guarantee from the hostel owner who recommended this particular tour that the money we spent definitely goes back into the community. I must admit that I did love meeting the children in the local school as they are genuinely keen to meet you and hold your hand and in the end that did make it all worthwhile. Theroux though was pushing me even beyond this with his novel, that is of finding a way of immersing yourself in their way of life and not just running away and locking yourself into one the safe tourist hotspots. 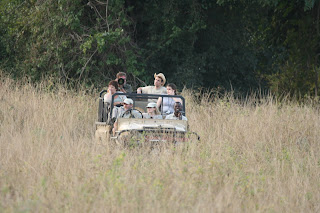 He really does not have patience for the safari types. While reading it I did not know how guilty to feel about the money I spent on our honeymoon safari to Zambia. I have always wanted to go on safari to see these great animals in their natural environment. We went with Remote Africa Safaris which does a lot to support the local community so does this justify our trip in some way. But yes I was greeted at the airport and whisked away to a fantastic lodge where I ate the most amazing food and went on safaris to go big five spotting. There was the option of course to visit the local village which is sponsored by Remote Africa Safari's but we saved this for our later trip to Mozambique. Actually maybe I can claim to have done it right in Mozambique as I stayed at Guludo Beach Lodge renowned for it's sustainable model to relieve poverty in the area, so much so they have actually won awards for it.

So I guess the question should be before you go travelling, "What are you going travelling for?" To be honest though Theroux throughout his book does not even leave it open for you to have such debates. He has made up his mind about what he is travelling for and lets just say it's not your average tourist experience. Just for the sake of asking another question, "Is there anything wrong with just being an average tourist?" After all his experiences included being shot at, and that to be frank is not my idea of a holiday! His tour was in many ways also nostalgia for his days when he taught in the Malawi bush. I have read him described as the witty observant but sometimes his comments seemed rather harsh and judgemental but possibly truthful.


In the end would I recommend reading this book, yes. If for nothing else than enjoying reading about his experiences and feeling envious for the fact that I would just not be brave enough for travelling the way that he did. At the same time always questioning his judgements of the people and their way of life and asking 'Is that how they see their Africa?' One thing I do know Africa is always calling me to come back.
Posted by Brinabird the wee man the Diva at 16:12